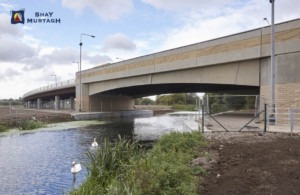 The Chelmer Viaduct project is a £28m investment by Chelmsford City Council to increase capacity along the viaduct, reducing congestion and making the road safer. This involved the demolition of the existing viaduct, construction of a new viaduct, building 3 lanes of carriageway, a shared footpath and cycleway.

The bridge itself was made of steel and designed by Aecom. Shay Murtagh, contracted by Graham Construction, based the precast design around this. The client wanted to reconstruct the viaduct and surrounding area based on the on the original layout of old the structure. However, they also wanted to enhance the structure with some architectural features, hence the decision to use coloured concrete (Buff).

The parapet on the main bridge span was cast using a customised Reckli formliner, purpose made in Germany specifically for this project. The unique motif captured a local theme, including features associated with Chelmsford, which frame the caption “CHELMER AND BLACKWATER NAVIGATION”. In total, 15 tonnes of pigment were used to create the striking Buff colour concrete, with a consistent quality and aesthetic achieved throughout all units.

The new viaduct was officially opened on the 13th of April 2016 by Roads Minister, Andrew Jones and Highways England Chief Highway Engineer, Catherine Brookes with representatives from GRAHAM Construction and Essex County Council.

We would like to congratulate Aecom, Graham Construction, and Chelmsford City Council on the successful completion of this major work. The Chelmer Viaduct is a benchmark in the UK for its unique and bespoke design. We are delighted to be part of a great working team and have this work stand out in our project portfolio.