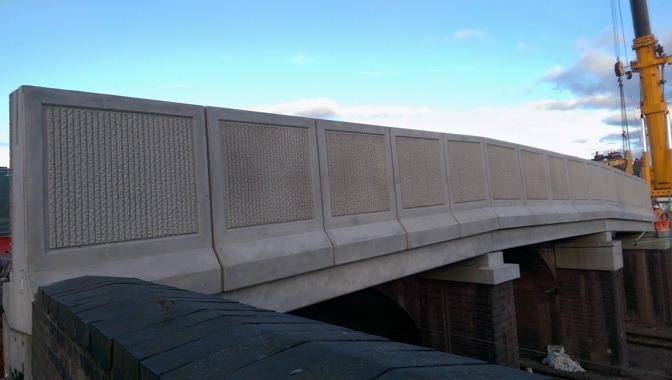 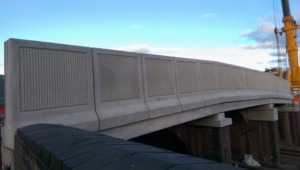 Shay Murtagh Precast were contracted by J Murphy & Sons on their project as part of Network Rail’s Railway Upgrade Plan. The plan which is to deliver a better, more reliable railway service for more than four million passengers that travel by train each day.

The upgrade of the Hungerford Road bridge is part of a wider £17million improvement programme to Network Rail structures between Crewe and Manchester.  This project included strengthening work and the rebuilding of the southern side of the structure including a new parapet wall and the installation of new barriers and kerbs.

The manufactured unit weights are as follows:

Roadside face was red brick faced on the approach units which was completed here in the factory with a form liner finish to the track side.

Pre-delivery a trial assembly was held at our factory in Raharney where both J Murphy and Network Rail inspected after which all was disassembled and shipped to site.

The Hungerford Road bridge opened three weeks ahead of schedule in May 2016, and all the team at Shay Murtagh Precast take the opportunity to thank all involved.