The Damage to Dawlish Sea Wall

In February 2014 a violent storm caused widespread damage across the south of England including the Dawlish sea wall. Dawlish, on the South Devon coast was one of the most affected areas. The Dawlish sea wall was overwhelmed and the railway line, which forms an important link in the main railway line across the south coast through to Cornwall, was virtually destroyed.

Temporary repairs restored the link, but with a one metre rise in sea levels forecast to take place within the next hundred years and it was clear that the final repairs and restoration would have to be on a major scale.  World leading marine, coastal and railway engineering experts were involved in the design of the new wall.

Sadly, many of the historic features of the old town would have to go if the railway line and indeed the town itself, were to be protected from the storms.  In addition the new sea wall would need to be two and a half metres higher than the existing wall. An innovative design incorporating a recurve, which would turn the waves back into the sea, would be needed.

Network Rail, was responsible for the work, part of the South West Rail Resilience Programme, and BAM Nuttall, one of their main contractors, called upon Shay Murtagh Precast Concrete to design and manufacture the panels on the face of the new wall.

These panels have a unique pattern, with a 3d shadow effect, and the design was inspired by the granite blocks that formed the construction of the old coastguard hut, which has had to be demolished as part of the project.

Shay Murtagh manufactured the moulds that create this pattern, and that will temper the unavoidably modern appearance of the new sea wall with an attractive reflection of the historic structures it replaces.  This was work for experienced technicians, and Shay Murtagh’s craftsmen have done a superb job in recreating the appearance of natural stone in modern precast concrete.

The imagination and innovation necessary to this project extended to the use of an eight-legged, self-contained walking jack-up barge, the  ‘Wavewalker’, which is the only one of its kind in Europe; using the ‘Wavewalker’ enabled work to be carried out during more states of the tide than would otherwise have been possible.

The South West Rail Resilience Programme is a huge project, and one that will protect the important rail links across the southern coast of England. Shay Murtagh is proud to be playing a part in this scheme, and to be working alongside BAM Nuttall in another successful collaboration. 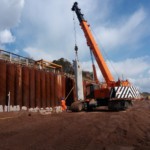 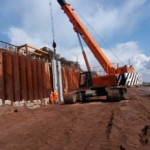 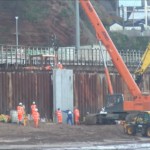 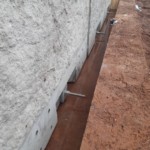 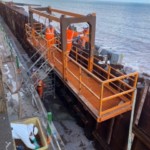 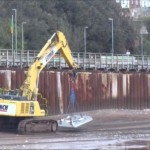 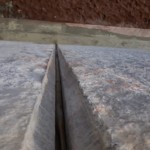